In this lesson, you accomplished two learning goals.

First, you interpreted an equation in order to create a verbal description of what the equation means within a given context. 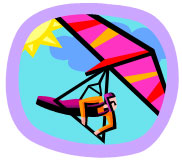 A hang glider jumps off a cliff and sails toward the ground. The height of the hang glider, h, above the ground t minutes after jumping off the cliff is described by the equation:

In this equation, 700 represents the height of the cliff above the ground, and 25 represents the number of feet that the hang glider descends each minute.

Second, you used an equation to generate a solution for a particular problem, and then interpreted the solution within the context of the problem.

Sheila and her friends wash cars as a fund raiser for their school band. The amount of money that they raise, m, after washing c cars, will be determined by the equation m = 5.50c – 25. How much money will Sheila's school band raise if they wash 15 cars?

The solution to this equation can be found by substituting c = 15, and then following the order of operations to simplify the expression.

Because the context of the problem is about raising money, m represents an amount of money. How much money will Sheila's school band raise if they wash 15 cars?