Advertising uses a special kind of writing to affect an audience’s point of view, behavior, and pocketbook. Authors write advertisements for various purposes, including to support a political candidate, promote an idea, or sell a product.

In the middle of the last century, a company that sold shaving cream came up with a rather unusual yet very effective way of advertising its product. Instead of putting all their large text on one billboard, the writers made smaller individual signs with short phrases. The signs were stuck in the ground along the shoulder of the highway so the people in the passing cars (their audience) could comfortably read them and make sense of the message—for example, “Buy Burma Shave!”

Read the Burma Shave signs below. Click on the words in each column of phrases that rhyme.

You may immediately wonder whether “HUR” is a real word. It may not be in the dictionary, but if it isn’t, why do you think the advertising writers made up the word? Perhaps they used the word for these two reasons: first, “HUR” rhymes with “per,” which makes the billboard more likely to catch the attention of the audience. Second, “HUR” is a clever reference to a popular film, Ben Hur, that billboard readers of the time would have recognized. Both textual elements, rhyming and clever wordplay, help the advertising writers at Burma Shave achieve the overall purpose: to sell their products.

Both sets of signs have cleverly written text that works to convey messages as well. Use knowledge of advertising text you have learned so far to figure out what those messages are.

Answer the following questions about the text of the advertisements. 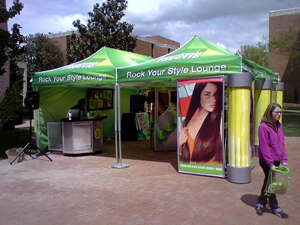 Advertising texts are written to persuade. Many advertisements target specific audiences by tailoring the message in terms of the age, ethnicity, politics, gender, or profession of their most likely viewers. Often, the advertisements use texts that come right out and say, “Buy Brand X soap because it’s the best soap on the market.” Other times, they imply a subtext, an indirect thought, or image. For example, a video advertisement might show a person who suddenly becomes successful and popular right after using Brand X soap. Of course, not all texts are successful at persuading us of a claim; we all have different needs and personal reactions to new information. These subtexts are called emotional appeals.

View the video below that highlights six frequently used advertising appeals. Use the same reading and thinking strategies for printed text to analyze the effectiveness of each advertising appeal. Before you start the video, read this list of techniques and the examples. Use your notes as you watch the video to jot down your thoughts about what makes each ad an example of the use of one of these advertising techniques.

Use the information in the video and your own reactions to answer the following questions about the various advertising techniques depicted.

The techniques above are easy to identify in advertising, but when they are used in other media, perhaps speeches or persuasive text, they become harder to identify. Read the selection below and try to identify which technique from the above list the author uses to persuade the reader. Answer the question using your notes. When you are finished, check your understanding for a sample response. 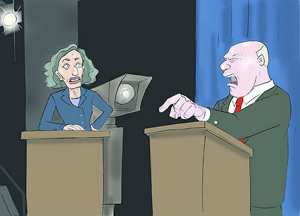 Our town was suffering as a result of the recession. There were potholes everywhere, and people were afraid to cross our beautiful little covered bridges for fear of them collapsing. Then, just in time, Ed Riley appeared in town and immediately became interested in saving our town. Now he wants to run for city council so that he can work hard to make our town safe and enjoyable again. Everyone who is interested in the future of our town is going to vote for him. You should too!

Which technique from the above list does the author use to persuade the reader?

Check Your Understanding
Sample Response:
If you said that the bandwagon appeal was used in this text, you would be correct. When the author says that everyone is going to vote for Ed Riley and “You should too,” you know that he is using the bandwagon appeal.

Just as you identified the different appeals in advertising, you should be on the lookout for them as you read and listen to the media.