One morning you wake up, get ready for school, and go downstairs, just as you do every day. Today, however, your mother looks different. She looks even more stressed than usual.

She glances up from the kitchen table, brushes back a clump of untidy hair from her eyes, and says, “No school today.”

“What?” you say in disbelief. “Did you say ‘no school’? Why not? It’s not Christmas or the Fourth of July or anything, is it?”

“No,” she says. “It’s just that the world is going to end next Tuesday and there’s some shopping I want to do before then.”

Worried now, you ask, “What do you mean the world is going to end? Where did you hear that?”

“I read it in the tabloid newspaper I picked up in the checkout aisle at the grocery store this morning.”

Of course, this whole scenario is unlikely to happen, but what if it did? Would you believe the horrible news your mother was telling you? If not, why not?

One reason might be the source of her information: that newspaper she got at the grocery store. Why might you not believe the information written in such a newspaper? That is the subject of this lesson: the role that various media play in focusing attention on events and issues and how they seek to influence the opinions of their audiences. In the case of a headline about the coming end of the world, it would not be unusual if you didn’t accept your mother’s frightening opinion of the future.

Using your notes, make up a few headlines that you might find in a tabloid newspaper. When you’re finished, check your understanding for sample responses.

“Large Toad in Center of the Earth Created Deserts” 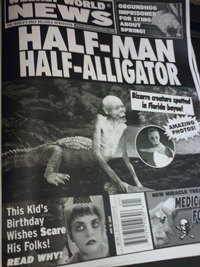 Below are examples of headlines that could be found in today’s newspapers. Read each one and decide whether it contains information you would most likely read in a conventional, mainstream newspaper such as the New York Times or information you might find in the weekly newspapers at a supermarket checkout. Drag each headline to the correct column: “Conventional Newspaper” or “Tabloid.”

In this lesson, we won’t confine our investigation of media texts to tabloids. We will also look at some of the forms of messages and images we are exposed to every day by television, film, newspapers, and the Internet. 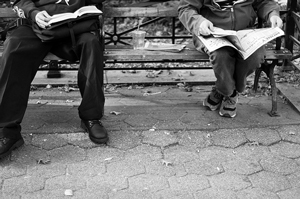 We conceive and communicate ideas in a variety of ways. Whether a writer is contributing to a play, movie script, TV advertising campaign, billboard message, documentary film, newspaper article, Web site, or blog, he or she is in the business of communicating through sight, sound, intellect, and emotion. 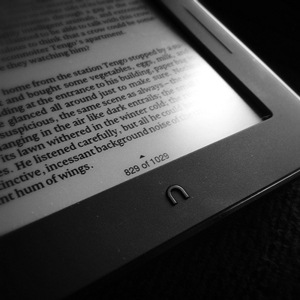 Source: Closing in on the end of “1Q84”, Steve Mohundro, Flickr

Each means of communication uses design elements particular to itself. For example, a scary movie might use music to convey suspense, while a newspaper article might plaster a headline across the page in oversized print. Watch the video below, a short example of how a TV series used music to instill in the audience a particular emotion. The Twilight Zone is an American television anthology series created by Rod Serling in the 1950s. The show is a series of unrelated stories containing drama, psychological excitement, fantasy, science fiction, suspense, and horror. Episodes often conclude with an unexpected twist.

Next, let’s take a look at some of the ways advertisements construct their messages to impact audiences.