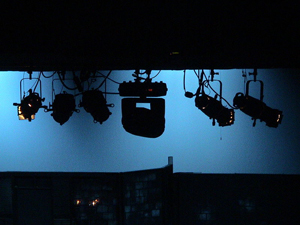 For example, when we read the stage direction “Hook shakes Michael off his claw as if he were a drop of water,” we know that Hook is so strong and skilled at using his claw that he can even shake off a child hanging onto it. Similarly, when the stage direction indicates that Peter uses his sword prop “with dazzling rapidity,” we understand that he is extremely fast and skilled in fencing.

This following scene comes near the end of the play when the hero Peter Pan battles the villain Captain Hook to save the children of Neverland who have been captured and held on Captain Hook’s pirate ship. 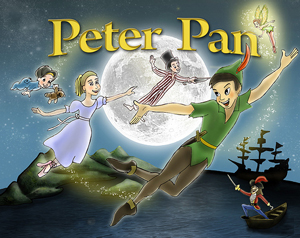 PETER
Put up your swords, boys. This man is mine.

(Hook shakes Michael off his claw as if he were a drop of water, and these two [enemies] face each other for their final bout. They measure swords at arms’ length, make a sweeping motion with them, and bringing the points to the deck rest their hands upon the hilts.)

HOOK
(with curling lip) So, Pan, this is all your doing!

PETER
Ay, Jas Hook, it is all my doing.

HOOK
Proud and insolent youth, prepare to meet thy doom.

PETER
Dark and sinister man, have at thee.

(Hook or Peter this time! . . . Peter is a rare swordsman, and parries with dazzling rapidity, sometimes before the other can make his stroke. Hook, if not quite so nimble in wrist play, has the advantage of a yard or two in reach, but though they close he cannot give the quietus with his claw. . . . He does not . . . quite see Peter, who to his eyes, now blurred or opened clearly for the first time, is less like a boy than a mote of dust dancing in the sun. . . . Hook’s sword is whipped from his grasp, and when he stoops to raise it a little foot is on its blade. There is no deep gash on Hook, but he is suffering torment as from innumerable jags.)

(Peter raises the sword by its blade, and with an inclination of the head that is perhaps slightly overdone, presents the hilt to his enemy.)

HOOK
’Tis some fiend fighting me! Pan, who and what art thou?

(The children listen eagerly for the answer, none quite so eagerly as Wendy.)

PETER (at a venture)
I’m youth, I’m joy, I’m a little bird that has broken out of the egg. 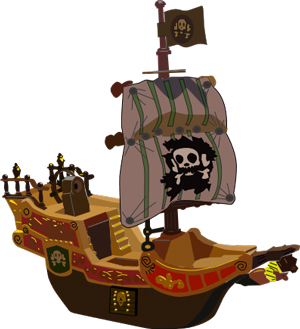 J. M. Barrie, like many other playwrights, carefully creates a protagonist and an antagonist who make worthy opponents for each other and who are fairly evenly matched. Staging and dialogue work together to paint a picture of the characters. Let’s look at how what a character says combines with what he does. When we read “Hook shakes Michael off his claw as if he were a drop of water,” Hook says, “So Pan, this is all your doing!” Hook’s actions and words tell us that Hook is figuring out the situation. In this case, we learn more about Hook’s character through stage directions and dialogue.

Copy and paste the chart below into your notes. Find evidence of the playwright’s use of staging techniques, specifically stage directions and props, that reveal character traits. Then, to put it all together, add an example of dialogue that supports each character trait. Keep in mind that some examples of dialogue may support more than one trait. One example in each category has been completed for you as a model. Once you’ve finished the chart, check your understanding to see possible responses.