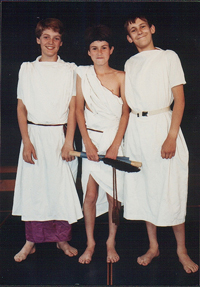 In playing a game, each team or player takes turns completing the skills required to try to win the game. In a dramatic play, each actor speaks the lines in turn that help to reveal the type of person that actor is playing. The back-and-forth exchange of lines in a play is the dialogue, which is the primary way that playwrights characterize their protagonists and antagonists.

The text you are about to read is from the opening scene of the 1939 movie script for The Wizard of Oz, based on a novel written by L. Frank Baum. If Dorothy is the protagonist or main character of the play, think about some of the ways that the playwright (or screenwriter as they are called in the movies) characterizes the Professor as an antagonist or opposing character to Dorothy. The statements in italics and in parentheses are stage directions, which we will study in the next section. Now, open the PDF and read “Passage 1.” When you are finished, return to this section. 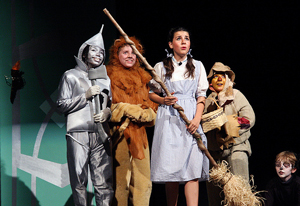 In the passage you just read, did you notice the tricks in the dialogue that the Professor uses in his brief conversation with Dorothy? Click on each one that you noticed.

If you checked all of the boxes, you are exactly right. The antagonist Professor uses some clever ways to establish power over the protagonist Dorothy and to convince her that he has some special knowledge about her.

Now, you will read an example of two characters who—as we may say about opponents in a game—are more evenly matched. This scene occurs just as Dorothy has begun to “follow the yellow brick road” on her way to see the Wizard in Oz. Again, open a PDF to read “Passage 2.” When you are finished, return to this section.

In the second passage, you can draw some conclusions about the characters based on the dialogue the playwright uses. Drag and drop each character trait below the Venn diagram into the “Dorothy,” “Scarecrow,” or “Both” areas, based on who the trait describes.

If you were able to match the descriptions correctly, you have demonstrated that you can be aware of the characterization clues that the playwright gives us in the dialogue.

Did you analyze the dialogue in the scene like this?

DOROTHY
Are you doing that on purpose, or can’t you make up your mind?

SCARECROW
That’s the trouble. I can’t make up my mind. I haven’t got a brain — only straw.

Dorothy asks a lot of questions. The scarecrow gives different answers. He says he can’t make up his mind.

DOROTHY
How can you talk if you haven’t got a brain?

SCARECROW
I don’t know. But some people without brains do an awful lot of talking, don’t they?

Dorothy is still asking questions. The scarecrow answers with a question. He still seems unsure of himself. His answer, though, is funny, but it makes sense. Even Dorothy agrees.

DOROTHY
Well, we haven’t really met properly, have we?

DOROTHY
How do you do?

SCARECROW
How do you do?

Look how nice they are to each other.

If you did analyze the dialogue something like this, then you know that when you read a play carefully, you can understand how a playwright uses dialogue to develop characters.