Let’s take a look at some introductions that use different approaches. The first writer, Colin Perkins in Introducing the Vertical Amusement Park, uses an anecdote from his childhood to introduce his story about a plan for a vertical amusement park to be housed in a skyscraper.

Growing up in the middle of Ohio, we had two of the country’s best amusement parks just a few short hours away. Part of the fun of going to them was the growing sense of anticipation as we got close enough to see the skyscrapers peaking up on the horizon. And then there was the completely overwhelming wave of joy that ensued once we finally entered the park: rides over here, games over there, junk food and souvenirs everywhere you look.

The following paragraph comes from the Newsweek.com article “High on Anxiety.” This introduction uses a startling fact to begin an article about people who prefer to be anxious rather than seek treatment for anxiety.

Considering that anxiety makes your palms sweat, your heart race, your stomach turn somersaults, and your brain seize up like a car with a busted transmission, it’s no wonder people reach for the Xanax to vanquish it. But in a surprise, researchers who study emotion regulation—how we cope, or fail to cope, with the daily swirl of feelings—are discovering that many anxious people are bound and determined (though not always consciously) to cultivate anxiety. The reason, studies suggest, is that for some people anxiety boosts cognitive performance, while for others it actually feels comforting.

In the third example, writer Erik Eckholm uses a quotation from an expert to introduce his article about the dangers of suburban deer during their mating season.

These are fraught weeks for drivers, deer and the nation’s car insurers: costly auto-deer collisions make a special jump during the mating season, usually October through December, and peak each November.

“The bucks throw caution to the wind as they chase does during the breeding season,” said Billy Higginbotham, a wildlife specialist at Texas A & M University. “If this happens to carry them across a roadway, they don’t seem to care.”

State Farm Insurance estimates that deer collisions over the past two years reached 2.3 million, up 21 percent compared with five years ago, and still more encounters go unreported. The annual number of collisions may be as high as two million a year, according to Terry A. Messmer of Utah State University.

You can also use an illustrative description to introduce your paper. This is particularly effective when you are writing a persuasive paper. Here is the introductory paragraph from “Law and Disorder,” an article about the girlfriend of one of the richest lawyers in Texas and her battle to keep his estate.

Darla Lexington sleeps in a very dark room in a very large bed, alone. Like a particular kind of Houston woman, the fact that she lives on the top floor of a luxury apartment building is a sign of reduced circumstances, though in her case the loss of an impressive River Oaks home resulted from a death instead of a divorce. The bedspread and curtains are black, giving the room the gloom of mourning. Beside the bed, leaning against the wall, is a large portrait of her lover of ten years, John O’Quinn, the infamous trial lawyer who died in a terrible car accident in the fall of 2009. Darla, who at 59 has the courtesan’s hourglass figure, the geisha’s will to please, and a soft, baby girl voice, talks to the portrait often, especially when she is lonely or sad or, as is frequently the case these days, really, really mad. 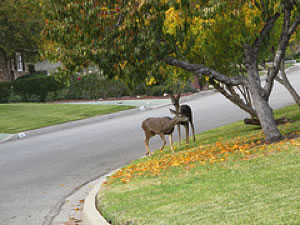 Source: Deer on the side of the road, donielle, Flickr

Now, let’s revise an introductory paragraph and make it more interesting for the reader. Write either an illustrative description or use the following quote:

“About 1.5 million deer-vehicle collisions happen each year in the United States, according to the National Highway Traffic Safety Administration. Those accidents cause about 150 deaths and $1.1 billion in property damage annually, according to NHTSA” (CNN.com).

Using your notes, write your responses. When you are finished, check your understanding .

If you used the quotation above, your introduction might be similar to this paragraph:

There are many problems with the cute little white-tailed deer that you might see wandering through your neighborhood at sundown. The deer cause many problems, from eating someone’s prized rosebushes to infecting people with Lyme disease or running out into the street and being hit by a car. You might think it is cruel to consider eliminating these deer, but the truth is that it is better for all concerned to get rid of them. Suburban deer harm residents, the environment, and the deer themselves. Because of the rising deer population, about 1.5 million deer-vehicle collisions occur each year, causing 150 deaths (CNN.com).

If you, however, wrote an illustrative description and didn’t use the quotation, your introduction might look more like this one:

It’s dusk on a Monday night in November. The leaves are falling off the trees, swirling in the air. You smell burning wood and wonder if your parents have started a fire in the fireplace at home. A white-tailed doe and her fawn are in your neighbor’s lawn eating her prize-winning roses. You wish you had your camera to take a picture of such a charming scene. Suddenly, another deer bolts across the road. You slam on the brakes and skid to a stop, narrowly avoiding a costly collision. The suburban deer population has exploded in recent years, resulting in costly property damage and injuries to humans and deer. Suburban deer harm residents, the environment, and the deer themselves.