The purpose of quoting a source is to support your point or argument.  Some writers think the more quotations in a research paper, the more intelligent and well researched the paper will appear. But this is not the case.  Using too many quotations—a source’s exact words placed between quotation marks—overpowers your position (and writing style).

In other words, quote when there is a compelling reason to do so; do not just indiscriminately sprinkle your writing with quotations because you think they look good or make you look scholarly. Make quotations count!

Word: In Ron Levi’s book, James Todd referred to his literary critics as “vultures” (47). (print source—page number alone in citation because author’s name is in the sentence)

Phrase: In her critique of soap operas, Tania Modleski argues that some view television as “a vast wasteland” and soap operas as “the least nourishing spot in the desert“ (123). (print source—page number alone in citation because author’s name is in the sentence)

Sentence: “If television is considered by some to be a vast wasteland, soap operas are thought to be the least nourishing spot in the desert,” according to writer Tania Modleski (123). (print source—page number alone in citation because author’s name is in the sentence)

Group of sentences: “Although the results of the experiments were astonishing,” noted the primatologist, “we had hoped to learn even more about the great apes. Do they dream in color? Are their nightmares like ours?” (Jenkins). (online source—author’s name alone in citation because it wasn’t mentioned in the sentences and because this source has no page numbers)

Fitzgerald describes Gatsby’s thoughts as he stands on his dock with Daisy:

Possibly it had occurred to him that the colossal significance of that light had now to him vanished forever. Compared to the great distance that had separated him from Daisy it had seemed very near to her, almost touching her. It had seemed as close as a star to the moon. Now it was again a green light on a dock. His count of enchanted objects had diminished by one. (98)

The Marble House in Newport, RI was one of the mansions used as Gatsby house in the 1971 film
The Great Gatsby. At right, Lady and gentleman in clothing from the 1920s.

Quote a single line of poetry as you would any other short quotation. If a quotation includes up to three lines of a poem, type the lines together like prose, but mark the line breaks by using slash marks with a space on each side. Cite the author’s name, if it’s not already in the text, and the quoted line number(s) of the poem.

In his poem “Mending Wall,” Robert Frost writes, “Something there is that doesn’t love a wall, / That sends the frozen-ground-swell under it” (1–2).

If the quotation is three lines of poetry or longer, set it off like a block quotation (see above).

In his poem “Mending Wall,” Robert Frost questions the building of barriers and walls:

Before I built a wall I’d ask to know

What I was walling in or walling out, 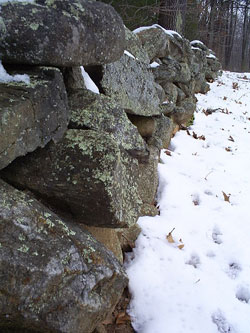 This is the Mending Wall that Frost wrote his famous poem about.
It is located in Derry, New Hampshire at his Farmhouse.


Now it’s your turn to practice integrating sources by quoting. Imagine that you are writing a research paper about the topic in each of the following boxed examples. Use your notes to write a sentence or two as they might appear in your paper, quoting from the excerpt. Remember to use signal phrases, embed the quotations, and cite the sources. Don’t attempt to paraphrase or summarize the excerpt; simply quote some of the information correctly. 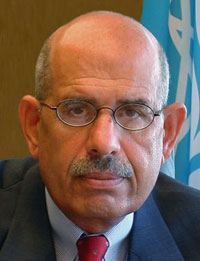 The dramatic nighttime appearance by El Baradei—the Nobel Peace Prize winner who returned to Egypt last week after the protests began—placed him at the forefront of a leaderless grass-roots revolt that has brought one of the Arab world’s longest and most entrenched dictatorships to the brink of collapse.

Now that you have quoted from the news article, check your understanding to see one possible quote from this source. Your sentence will differ from this example. Just be sure that you used a signal phrase, embedded the quotation, and cited the source.

After almost a week of public protests in Egypt, news sources reported that Mohammed El Baradei surfaced as “the face” of the “leaderless grass-roots revolt” (Allam and Bengali). 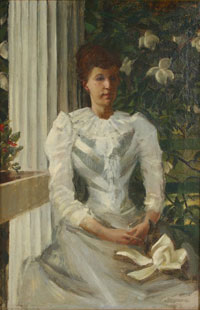 Topic: “The Story of an Hour,” a short story written by Kate Chopin in 1894, tells of a young woman, Louise, who is told that her husband, Brently, has been killed in an accident. Her unexpected internal response is to think of how free she will be, now that her husband is dead, to do whatever she wants. Then something surprising happens in the last three paragraphs. (Josephine is Louise’s sister; Richards is Brently’s friend.)

Excerpt: Someone was opening the front door with a latchkey. It was Brently Mallard who entered, a little travel-stained, composedly carrying his grip-sack and umbrella. He had been far from the scene of the accident, and did not even know there had been one. He stood amazed at Josephine’s piercing cry; at Richards’ quick motion to screen him from the view of his wife. But Richards was too late. When the doctors came they said she had died of heart disease—of the joy that kills.


Again check your understanding to see one possible quote from this passage. Your sentence will differ from this example. Just be sure that you used a signal phrase, embedded the quotation, and cited the source.

The doctors attributed Louise’s death to “the joy that kills” (Chopin 553), mistakenly thinking that her heart stopped because she was so happy to see her husband.

(The citation is immediately after the quotation because the last part of the sentence is commentary due to the word mistakenly. Without that word, the citation could be where it is or at the end of the sentence.)