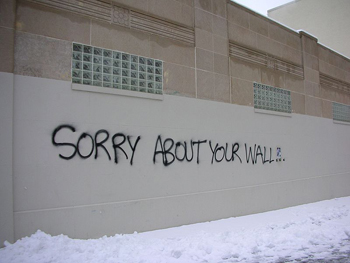 If the person who wrote the graffiti was sorry about marking the wall, he or she wouldn’t have marked it in the first place.

Think about this description of paradox from Perrine’s Sound and Sense:

The value of paradox is in its shock value. Its seeming impossibility startles the reader into attention and, by the fact of its apparent absurdity, underscores the truth of what is being said.

Isn’t the writing on the wall in the photo above rather startling? You may be asking yourself why someone who has painted graffiti on a wall would apologize. Is this a joke or is the painter sincere? This photo probably draws your attention because of the absurdity of its message.

Read the examples of paradox below and listen to examples featured in “Figures in Sound” from the American Rhetoric Web site. For some of the examples, you can listen aloud. Click on the arrows to play the audio files.

I don’t hustle with people who are dishonest.

The closer we are to danger, the farther we are from harm.

delivered by Billy Boyd (from the movie The Lord of the Rings: The Two Towers)

Paradox has been defined as “Truth standing on her head to attract attention.” But it must be admitted that writers, like other mendicants and mountebanks, frequently do try to attract attention. They set out conspicuously, in a single line in a play, or at the head or tail of a paragraph, remarks of this challenging kind; as when Mr. Bernard Shaw wrote: “The Golden Rule is that there is no Golden Rule”; or Oscar Wilde observed: “I can resist everything except temptation”; or as a duller scribe (not to be named with these and now doing penance for his earlier vices in the nobler toil of celebrating the virtues of Mr. Pond) said in defense of hobbies and amateurs and general duffers like himself: “If a thing is worth doing, it's worth doing badly.” To these things do writers sink.”

Captain Ramsey: I understand you two are contemplating a “blitz-out.” What sort of blitz were you contemplating?

Captain Hilts: Well, we sneak out at night to a spot I found near the wire—a blind spot. Then we dig straight down three feet, take the dirt, spread it on top so it won't make a pile, and then straight out. Ives here is a tunnel man, so he digs in front, pushes the dirt behind him, and I stash it behind me. Then we just burrow right through the dirt like a couple of moles. Then by dawn we're under the wire, across the open space, into the woods—and gone.

Squadron Leader Bartlett: Hilts, how do you breathe?

Captain Hilts: Oh, we got a steel rod with hinges on it and we shove it up and make air holes as we go along.

Flight Lieutenant MacDonald: Now, why didn't anybody think of that before? It's so stupid it's positively brilliant.

delivered principally by Steve McQueen (from the movie The Great Escape)

Now that you’ve heard and read paradoxes, see how well you understand contradictory or incongruous terms. Example: Woody Harrelson’s character from White Men Can’t Jump says, “I don’t hustle with people who are dishonest.” However, “hustling” carries the connotation of deception in a sport or game. Therefore, the terms “don’t hustle” and “dishonest” are contradictory, and the statement is paradoxical. In the exercise that follows, words have been paired as a contradiction in terms. See if you can pair the paradoxical terms by dragging and dropping them into place. The first one has been done for you.

Hints: You might not use all of the terms. And some of the statements in this exercise will contain more than one set of contradictory terms.


In the next section of this lesson, you will evaluate the purpose of paradox, the way in which it conjures a new way of seeing or understanding seemingly incompatible elements. The words you heard Hubert Humphrey use in accepting the Democratic presidential nomination will be studied as an example.