Think about a strawberry ice cream cone, the luscious, creamy, pink concoction dripping down the sides of a sugar-studded cone. Can you picture it? That is what is meant by imagery. When a poet or author uses words that help you see, feel, smell, hear, or taste an object, the poet has employed the poetic device of imagery. Some images will appeal to only one sense, while some might appeal to several. In this section, you will look at several poems that feature imagery.

Let’s start with the poem “There Will Come Soft Rains” by Sara Teasdale. As you read the poem below,click on the words that are examples of imagery,  phrases that appeal to the senses. If you choose correctly, the words will highlight. Try to find all seven examples.

There Will Come Soft Rains

There will come soft rains and the smell of the ground,
And swallows circling with their shimmering sound; 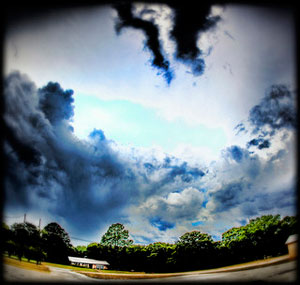 And frogs in the pools singing at night,
And wild plum trees in tremulous white;

Robins will wear their feathery fire,
Whistling their whims on a low fence-wire

And not one will know of the war, not one
Will care at last when it is done.

Not one would mind, neither bird nor tree,
If mankind perished utterly;

And Spring herself, when she woke at dawn
Would scarcely know that we were gone.


Did you notice that all of the poem’s imagery comes at the beginning of the poem? Teasdale sets the scene for the reader and then goes on to present a point about mankind and war. This creates a contrast between idyllic peace in the first stanzas and the destruction of mankind through war in the last stanzas.

Click and drag the dial in a circle to turn it. As you do so, read about the sensory details of smell, taste, sight, sound, and touch found in “There Will Come Soft Rains.”

Now, take a look at another poem, “The Meadow Mouse” by Theodore Roethke. 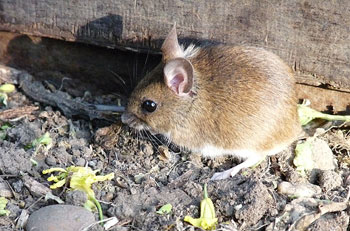 1
In a shoe box stuffed in an old nylon stocking
Sleeps the baby mouse I found in the meadow,
Where he trembled and shook beneath a stick
Till I caught him up by the tail and brought him in,
Cradled in my hand,
A little quaker, the whole body of him trembling,
His absurd whiskers sticking out like a cartoon-mouse,
His feet like small leaves,
Little lizard-feet,
Whitish and spread wide when he tried to struggle away,
Wriggling like a minuscule puppy.

Now he’s eaten his three kinds of cheese and drunk from his
bottle-cap watering-trough—
So much he just lies in one corner,
His tail curled under him, his belly big
As his head; his bat-like ears
Twitching, tilting toward the least sound.

Do I imagine he no longer trembles
When I come close to him?
He seems no longer to tremble.

2
But this morning the shoe-box house on the back porch is empty.
Where has he gone, my meadow mouse,
My thumb of a child that nuzzled in my palm?—
To run under the hawk’s wing,
Under the eye of the great owl watching from the elm-tree,
To live by courtesy of the shrike, the snake, the tom-cat.

I think of the nestling fallen into the deep grass,
The turtle gasping in the dusty rubble of the highway,
The paralytic stunned in the tub, and the water rising,—
All things innocent, hapless, forsaken.

Let’s examine the imagery Roethke uses in this poem. Using your notes, answer the questions below. When you are finished, check your understanding to see possible responses.

By examining the imagery in this poem, you can see what an impact its use has on the tone of the poem. As you read more poetry, pay close attention to the images used by the poet and determine their importance to the meaning of the poem. Understanding these images will help make the poem more meaningful to you as a reader.