Hyperbole is often used in poetry. Consider this poem by Natasha Niemi. The hyperboles appear in red text. 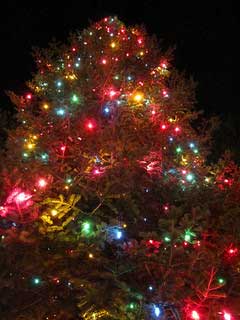 Source: A little big for the living room, Loozrboy, Flickr

Momma bought a tree bigger than Jack’s giant.
The branches were so long
They gave each other huge bear hugs.
It took a million lights
To even make the tree seem half awake

And a thousand gifts to soothe
The giant’s appetite.

Niemi exaggerates the size of the tree by associating it with the giant in “Jack and the Beanstalk.” Next, she further amplifies its size by making its branches capable of “bear hugs.” She boasts that it was so large it required “a million lights” and needed “a thousand gifts” to satisfy its huge appetite.

Niemi’s purpose is to make the reader envision a bright, glittering tree of mammoth proportions. Rather than telling us it is big (perhaps with details of its height and width), she shows us how large it is through hyperbole.

Some of these examples are not just hyperbole but could be considered other literary devices, too. The poet also gives the tree human qualities by using personification in describing the tree’s huge appetite and ability to give bear hugs. The last line of the poem also includes a metaphor comparing the tree to a giant.

Can you find the examples of hyperbole in this poem by Sharon Hendricks? Click on the phrases you think are hyperboles. If you choose correctly, the words will highlight.

Now, take a look at three stanzas from a poem by Jacinta Ramayah. Again, click to highlight the examples of hyperbole.

In the two poems, you may have noticed that a hyperbole often compares two objects and, therefore, may also contain a simile or metaphor. For example, “His nose is as cold as an ice box” is a simile. However, a dog’s nose cannot possibly be “as cold as an ice box,” so the simile is also a hyperbole. Also, think about this exaggerated description of the runner in the last stanza of “The Olympic Runner”: “tall as a Brobdingnagian.” This hyperbole is also a simile because a runner can’t possibly stand as tall as a giant in Gulliver’s Travels.

In “My Dog,” the hyperboles are used mostly for comic effect and are fairly easy to spot. In the poem about the Olympic runner, the poet includes hyperbole to show the reader how incredible and praiseworthy the runner is. During a poetry unit in your English class or when you take a test, however, you can expect that the poems will be more challenging. They may use hyperboles in a more complex way to create a serious effect. 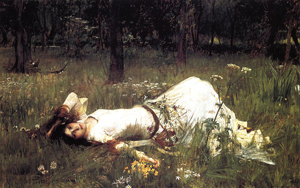 For example, at the burial of Ophelia in William Shakespeare’s Hamlet, her brother Laertes leaps into her grave begging the gravediggers to “pile your dust upon the quick and dead/Till of this flat a mountain you have made.” He is amplifying his grief by asking to be buried with her so deeply that the flat surface of the land is covered by a “mountain” of earth. Shakespeare’s purpose is not to amuse the audience but to illustrate the extent of Laertes’s love for Ophelia and his suffering as a result of her death.

Consider “A Concord Hymn.” Ralph Waldo Emerson wrote this poem in 1837 for the dedication of a monument at the site where the Battle of Concord was fought during the American Revolution on April 19, 1775.

Using your notes, write the hyperbole Emerson uses to amplify the historical significance of the battle. When you’re finished, check your understanding to see a possible response. 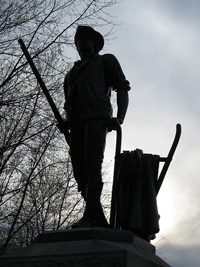 
From A Concord Hymn

By the rude bridge that arched the flood,
Their flag to April’s breeze unfurled,
Here once the embattled farmers stood,
And fired the shot heard round the world.

Hyperbole appears in the last line of the first stanza. Emerson proclaims that the “embattled farmers” (colonists) fired a shot that was “heard round the world.” Of course, that could not be literally true, but the consequences of this battle were felt all over the world. Thirteen colonies overthrew British rule and united to form what became the United States.