Extended metaphors are metaphors that continue the comparison across several lines of text or through an entire piece. For example, the series of stories The Things They Carried by Tim O’Brien is about soldiers deployed to Vietnam during the Vietnam War. In the beginning of the series, the things the soldiers carry are mementos from home. As the collection of stories progress, we read about the necessities they carry, such as pocketknives and mosquito repellent. Toward the end of the story, the act of carrying physical objects becomes an extended metaphor for the emotional burdens carried by soldiers in war. Here is an example from the text: 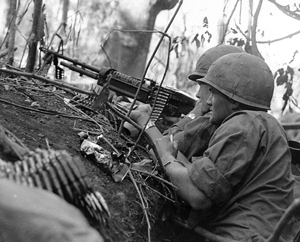 They carried the soldier’s greatest fear, which was the fear of blushing. Men killed, and died, because they were embarrassed not to. It was what had brought them to the war in the first place, nothing positive, no dreams of glory or honor, just to avoid the blush of dishonor. They died so as not to die of embarrassment.

—Tim O’Brien, The Things They Carried

The act of carrying equipment and mementos becomes the metaphoric act of carrying emotional baggage. Let’s return to the monologue from Shakespeare’s As You Like It. The entire monologue is an extended metaphor discussing the seven acts of a man's life. Here is a short excerpt:

All the world’s a stage,
And all the men and women merely players:
They have their exits and their entrances;
And one man in his time plays many parts,
His acts being seven ages. At first the infant,
Mewling and puking in the nurse’s arms.
And then the whining school-boy, with his satchel
And shining morning face, creeping like a snail
Unwillingly to school . . . 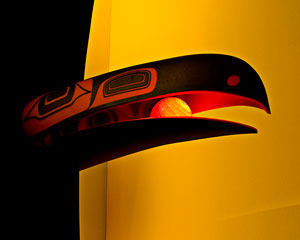 Source: “And the Raven Stole the Sun,” Cayusa, Flickr

Shakespeare uses this extended metaphor to explain that we do not have control of our own destinies. The acts of our lives are scripted for us as if we were appearing in a play.

Myths are used as extended metaphors to explain things that occur in the natural world that are difficult to understand. You are about to read the Native American myth “Crow Brings the Daylight.” Before you begin, you should know that the Inuit, the tribe to whom this myth belongs, live far to the north in the northern hemisphere. They experience a phenomenon called the “midnight sun.” The sun does not set in the summer and does not rise in the winter.

Read “Crow Brings the Daylight” in its entirety. When you're finished, read each passage and answer the questions below.

Inside the little boy’s ear, Crow whispered: “You want to play with a ball of daylight.” The little boy rubbed at his ear and then repeated Crow’s words.

The chief sent his daughter to the glowing box in the corner. She brought it to her father, who removed a glowing ball, tied it with a string, and gave it to the little boy. He rubbed his ear thoughtfully before taking the ball. It was full of light and shadow, color and form. The child laughed happily, tugging at the string and watching the ball bounce.


a. The sun
Correct!


b. The horizon
c. A magical circle

As soon as they were free of the snow lodge, Crow swooped out of the child's ear and resumed his natural form. He dove toward the little boy’s hand and grabbed the string from him. Then he rose up and up into the endless blue sky, the ball of daylight sailing along behind him.


a. What finally happens after sunset
Try again.


b. The beginning of the sunrise and how the sun seems to be flying across the sky as it rises
Correct!


c. How Crow tricked the child

In the far north, the Inuit saw a spark of light coming toward them through the darkness. It grew brighter and brighter, until they could see Crow flapping his wings as he flew toward them. The people gasped and pointed and called in delight.

The Crow dropped the ball, and it shattered upon the ground, releasing the daylight so that it exploded up and out, illuminating every dark place and chasing away every shadow. The sky grew bright and turned blue. The dark mountains took on color and light and form.

The snow and ice sparkled so brightly that the Inuit had to shade their eyes.


a. It is impossible to say, exactly.
Try again.


b. Everyone has died a fiery death.
Try again.


c. The sun has risen.
Correct!

The people laughed and cried and exclaimed over their good fortune. But Crow told them that the daylight would not last forever. He had only obtained one ball of daylight from the people of the south, and it would need to rest for six months every year to regain its strength. During that six-month period, the darkness would return.

The people said: “Half a year of daylight is enough. Before you brought the daylight, we lived our whole life in darkness!” Then they thanked Crow over and over again.


a. The months-long periods of darkness and light in the northern part of the world, the so-called “Land of the Midnight Sun”
Correct!


b. Why crows fly south for the winter and then return north during the spring
Try again.

c. The amazing fact that humans may cry when they are either happy or sad
Try again.

Now imagine that you are an Inuit child living in the Arctic Circle a long time ago. You may have little or no experience with science. Many events and changes that happen around you are difficult to explain. You experience month after month of cold and darkness, and then suddenly you see the sun. It stays for six months until it’s once again replaced by darkness. You would certainly want an explanation.

As you may have realized by now, the Inuit created the myth “Crow Brings the Daylight” to explain why the sun appears for only six months at a time. The metaphor of the sun as a “ball of light” continues or “extends” throughout the length of the story.