Let’s now read a letter written by a group of eight Birmingham, Alabama, clergymen in 1963 during the height of the civil rights era. The clergymen wrote the letter to promote compromise and peace between lawmakers and African Americans. You can print out the letter and annotate it as you read.

John Lewis, another noted activist during the same time period, echoes King’s words in this excerpt from a speech he wrote for the March on Washington.

To those who have said, “Be patient and wait,” we must say that “patience” is a dirty and nasty word. We cannot be patient, we do not want to be free gradually. We want our freedom, and we want it now. We cannot depend on any political party, for both the Democrats and the Republicans have betrayed the basic principles of the Declaration of Independence.

We all recognize the fact that if any radical social, political and economic changes are to take place in our society, the people, the masses, must bring them about. In the struggle, we must seek more than civil rights; we must work for the community of love, peace and true brotherhood. Our minds, souls and hearts cannot rest until freedom and justice exist for all people.

In the previous section, you read the letter from Jackie Robinson to President Kennedy and made notes about all of the connections that you noticed. As you used the graphic organizer to make your notes, you should have noticed that you were asked to write specifically what kinds of connections you observed.

When making text-to-text connections, identifying specific details is important. You should identify details from each of the texts that illustrate the connections you are making. This is important for guiding your understanding of what you’re reading, for preparing to draw conclusions about what you have read, and for defending those conclusions. For example, in the completed chart in the graphic organizer in the previous section, I made a connection between Robinson’s letter and John Lewis’s speech. If I wanted to make an argument about similarities between John Lewis and Jackie Robinson, I would need to provide specific evidence supporting my claim. Below, read an example from each of the texts we have read.

I would like to be patient Mr. President, but patience has cost us years in our struggle for human dignity.

To those who have said, “Be patient and wait,” we must say that “patience” is a dirty and nasty word. We cannot be patient, we do not want to be free gradually.

This textual evidence supports my idea that there were similarities between Jackie Robinson and John Lewis and how they viewed the progress of the African-American struggle for equal rights.

What do I do, however, with the letter from the Alabama clergymen that asks African Americans to be patient? The topic of the letter is the same as King’s and Lewis’s letters, and it contains a theme similar to that found in Jackie Robinson’s letter.

When you’re trying to connect texts, even those with differing viewpoints, you should first read through each text and then decide which ideas the texts have in common and what evidence supports your claims. Next, ask yourself how to incorporate the differing viewpoints. You know that the idea of waiting and patience is common to all three documents. With that in mind, if you were then to think about the civil rights movement, you might begin to understand that the idea of acting versus waiting was an issue with many groups of people. Now, return to the graphic organizer you worked on in the previous section. Add the evidence that suggests the idea of waiting, or not acting, from the letter of the Alabama clergymen. 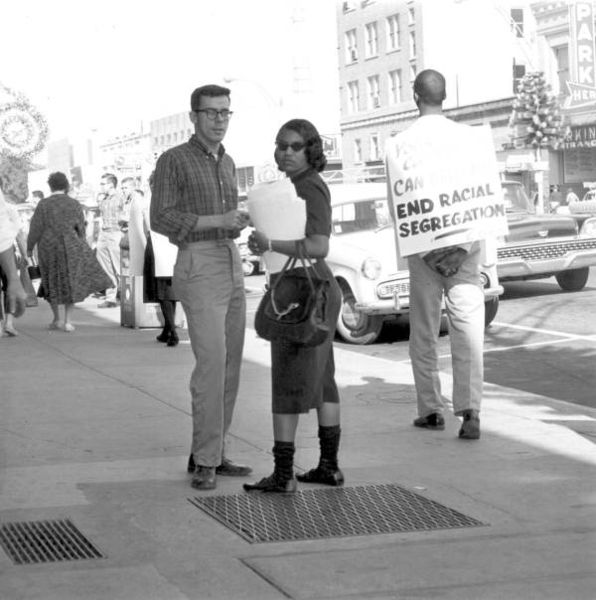 You are now going to read two articles about current issues in racial integration and one description from an incident during the civil rights era in the 1950s. Use your skills of connecting the texts to yourself, the world, and other texts as you read. Annotate as you read so that you can make those connections. Print the articles and short description, if possible, to make annotating them easier or use the highlighting feature of your software to annotate online.

Next, look over your annotations and determine what idea the three texts have in common. Most often, when trying to make connections between nonfiction texts, you should look for a thematic link, a theme that the texts share. Once you have identified your common idea, identify textual evidence that supports it.

Here is some context for the first article, about a high school in Wilcox County, Georgia, that began holding private, racially segregated proms in 1971 when the schools in the area were desegregated. In 2013, segregated proms were still being held.

Click the link to open a graphic organizer that contains the three articles and an activity based on them. You can save, download, and print the graphic organizer. When you are finished with it, go to the next section in this lesson. Graphic Organizer Instructions