A chemical formula is a combination of symbols that represent the elements in a substance or a compound. So how would we write the formula for this substance? 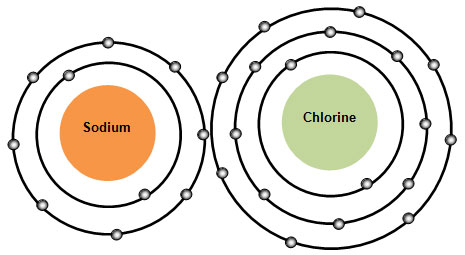 We would simply use the symbols for the elements. The symbol for sodium is Na and the symbol for chlorine in Cl. So the symbol for this compound is NaCl. NaCl, or sodium chloride, is commonly known as table salt. You can think of the symbols as the letters of the alphabet and the chemical formula as a word.

For example, CH4 is the chemical formula for methane gas. Methane gas is made up of the elements Carbon (C) and Hydrogen (H). The diagram below shows the atoms of a methane molecule. 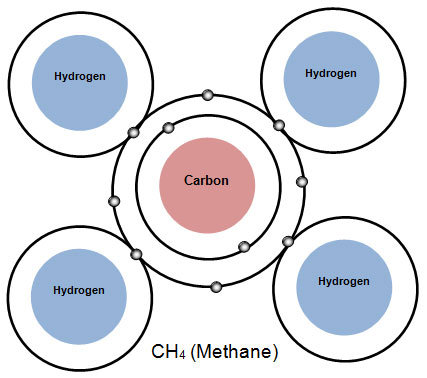 Notice in the formula CH4 that there is a number written lower and smaller after the symbol for hydrogen. This is called a subscript. Subscripts show the ratio of atoms of different elements in the compound. Since there are four hydrogen atoms in the molecule, the subscript 4 follows the symbol for hydrogen. If a symbol in a formula does not have a subscript, the number 1 is understood. In other words, there is only one atom of that element in this compound. So for methane, the ratio is 1 carbon atom to 4 hydrogen atoms.

What would the ratio for sodium chloride (NaCl) be?

Interactive popup. Assistance may be required.