In section one, you learned that a mixture is a combination of two or more pure substances that are not chemically combined.

Watch the following video for a brief introduction to mixtures. 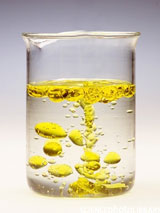 Mixtures can be separated physically. The video below shows how to separate a mixture of iron, sand, and salt.