As you learned in section one, both elements and compounds are pure substances. This means they are both made of one type of material and have one set of physical and chemical properties.

In this section, we are going to learn more about elements and compounds and their differences.

Watch this video for a brief introduction to elements.

An element is the simplest substance. A list of the elements can be found on the periodic table of elements. Elements contain only one kind of atom. Gold is an element. If you had a bar of gold and you kept breaking it down into smaller and smaller pieces, it would still be gold. Gold is made of nothing but gold.

Every element has a unique set of properties that can be used to identify the element. These characteristics are the same no matter what amount of the element is present. These properties include boiling point, melting point, density, and reactivity.

Look at the elements in the table below. You are probably familiar with these elements. These three elements have some similar properties, but each element can be identified by its unique set of properties.


A compound is a pure substance made up of two or more elements that are chemically combined. Elements combine by reacting, or undergoing a chemical change, with one another.

When these elements combine in the appropriate ratios to form the compound sugar, their properties are not the same at all. The properties of sugar are a sweet, white, crystalline solid. A totally new substance is created even though it contains the elements carbon, hydrogen, and oxygen. 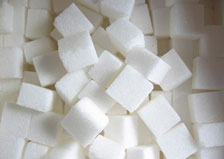 Compounds can be broken down into simpler compounds and into elements through chemical reactions.

Sources of images used for this section as they appear, top to bottom: